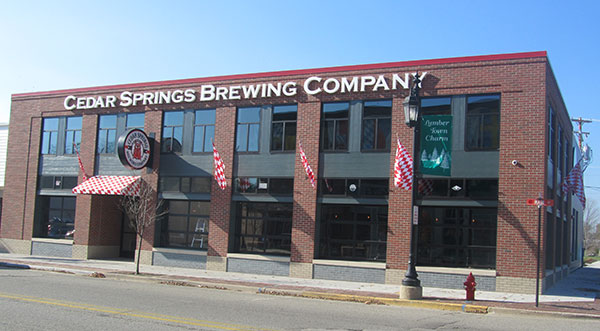 The Cedar Springs area received a shot in the arm this year with several new businesses moving in, and even more growth is on the horizon, thanks to the partnership efforts of the Community Building Development Team with the Cedar Springs Library and Cedar Springs City Council.

The big success story of the year is the Cedar Springs Brewing Company, which finally opened its doors at 95 N. Main, in mid-November. It was the culmination of a 25-year-dream for David Ringler, a.k.a “Director of Happiness” at the brewery, and it’s the first time in recent history that a new building has been built on Main Street in the heart of downtown Cedar Springs. 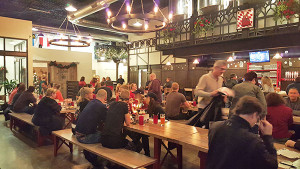 The brewery/restaurant features a variety of craft beers, focusing on German styles, along with a full food menu (which includes German dishes), wine and their homemade Cedar Creek Sodas, which are non-alcoholic beverages.

Since their opening, the brewery is jam-packed every night and it’s amazing to see so many vehicles in downtown Cedar Springs.

“We’ve had a wonderful reception from the community and been very pleased to welcome many people from outside our community who’ve come to visit, often multiple times,” remarked Ringler. “Some of this is to be expected, given that we’re new and over the holiday season, but we’re hopeful that we’ve made a positive impression and people will continue to visit.”

In the beginning it was difficult to keep up with the demand for beer, but people came anyway.

“We’ve remained very busy, which is a blessing,” said Ringler. “As we’ve progressed over the past six weeks, we’ve been able to adjust our inventories to keep up on beer production, which means we’ll be able to fill growlers soon.”

Ringler talked about some things customers can expect in the coming year. “Our beers will rotate and expand regularly, and our food menu will see the addition of daily specials and be updated at least 3-4 times over the course of the year. We will begin hosting live music regularly and we also have a number of events planned throughout the year (with details coming soon).”

He said they will also begin hosting “Community Giveback Nights,” beginning January 11, where they will be giving back 10 percent of food sales to the Cedar Springs Band Boosters on that evening. Other organizations will follow.

He said they will also begin growler sales, and canning their product for sale in the marketplace, so we will be able to find their beers in stores, bars and other restaurants.

“Our spirits line will also be launched, beginning with Wodka and White Lightning products,” added Ringler. “We will also add additional season sodas and soft drinks to our lineup.”

One of the big things will be the outdoor Biergarten, which will open in the spring, and add 70 to 80 seats.

Ringler is grateful to the community for how they’ve embraced the brewery. “Thank you. We’ve been humbled by the warm reception, encouraged by the enthusiasm, and we’re working hard to earn your continued support,” he said.

The brewery is one of several businesses to come to Cedar Springs this year. The brewery bought the Liquor Hut building, which they then leased to Cold Break Brewing, a home supply brewing company; Family Farm and Home bought the old Family Fare building; and Advance Auto built a new building on the site of the old Family Fare gas station. Since Advance Auto had bought Car Quest previously, they took in all the employees from the Car Quest shop on Main Street.

Another company coming to Cedar Springs is Display Pack, who bought the Wolverine World Wide warehouse at 660 West Street. Wolverine’s lease is up in 2017, and Display Pack is slowly taking over the building as Wolverine vacates the premises. Display Pack, employs 225 people, and up to 275 people seasonally. Since many of their employees live in Grand Rapids and those who walk won’t make the commute, they may hire as many as 60-80 people from this area.

Another group who is revitalizing Cedar Springs is the Community Building Development Team, through their partnership with the Cedar Springs Library and the City of Cedar Springs. Over two dozen organizations and businesses in Cedar Springs, along with dozens of individuals, have been working together for the past three years to develop eight acres of land, within the City limits, into “The Heart of Cedar Springs.” This place can be called our own “Town Square,” where the local citizens and visitors can enjoy a new library building, a community building, a recreation center, and an amphitheater, all placed among beautiful rain gardens and sculptures along a board walk on the banks of Cedar Creek.

Donations of land and cash, as well as pledges, as of November 2015, total over $2,555,000. The overall project is expected to cost approximately $10,000,000.  The plan is to raise funds for each individual project and to break ground for each facility when funds are adequate. Donations may be designated.

The Cedar Springs Library building is scheduled to be built first, breaking ground early next spring. A Capital Campaign Committee was appointed by the CBDT and they are in the process of writing grant proposals to large corporations and foundations to raise the funds needed to complete these projects.

Community Give Back: Cedar Springs Band Boosters Taste of My Town
Scroll to top